My Inspiration Behind the Life Cube

By Michael Conner, President, Life Cube, Inc.
I never imagined that I would be in the shelter business but here I am.   In 2005, after the devastation wrought by both Hurricane Katrina and a massive earthquake in Pakistan, I noticed the variety of shelter designs that were out there.  Different shapes and sizes, made from a number of products and materials, all a combination of form, function, and cost.  Yet an adequate portable design still did not exist.
As a life-long builder and inventor, I decided to take this on.  I was inspired by seeing people who were in need of something that I could provide.
I started doing research and sketching my idea.  I wanted to synthesize the cost and logistical advantages of a standard canvas tent and the ruggedness and utility of a trailer, with the speed and expandability of breakthrough inflatable technology.  My answer was the Life Cube.
The Life Cube is a rapid deployment air frame shelter systems that simplifies and expedites emergency response efforts.  It is the only tent system with an integrated hard-surface floor with steel hoops that unfolds into an inflatable airframe canopy and an interior storage space that allows easy maneuverability over the most challenging terrains.  It is an all in one solution for every emergency situation.
Within just a few years, Life Cube, Inc. designs, manufactures, and markets innovative air-beam shelters for a variety of markets and uses.  Learn more at http://lifecubeinc.com.
Posted by Life Cube at 3:43 PM No comments:

According to recent reports, natural disasters have made the year 2011 the costliest in terms of property damage thus far, and we are only seven months in. For the United States alone, 98 events (storms, flooding, fires and earthquakes) left $27 billion in economic losses, more than double the 10-year average of $11.8 billion. From these devastating statistics, we can conclude that natural disasters are not only devastating, they are extremely expensive.

Investing in a rapid deployment airframe shelter system ahead of time simplifies and expedites emergency response efforts.  Whatever preparation can be done in advance of a disaster saves precious time—and money. If the shelters are financed and manufactured today, when the tornado, earthquake, hurricane or flood hits, the shelters can be onsite and installed within 24 hours.

The most effective disaster relief programs are proactive. In order to stay true to our proactive mindset we have developed the Life Cube Foundation and a humanitarian project called Adopt a Cube. With these efforts we hope to facilitate inexpensive access of this unique shelter solution to non-profits, NGOs and international service organizations. Donations to support the cost of manufacturing and transporting Life Cube shelters can be made to the Life Cube Foundation or directly to our humanitarian aid partners.

Learn more about our humanitarian efforts at http://lifecubeinc.com/humanitarian.html.
Posted by Life Cube at 8:58 AM No comments:

Answering Basic Needs After a Disaster

The magnitude and frequency of natural disasters and humanitarian crises around the globe demand faster response times and increasingly adaptable approaches to support the delivery of medical treatment, aid and shelter.

That’s why I chose Life Cube after my career at the American Red Cross (as Government Liaison Manager for the Santa Barbara County Chapter. 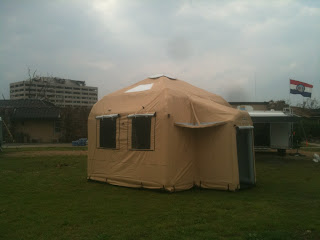 The three most important things after a natural disaster are seeking shelter, finding food and clean water.  Life Cube offers those who have been displaced after a disaster the most basic means of shelter and comes with food and water for five days.  (Optional packages also include an electrical system with 12-volt battery, solar panel trickle charger, lighting, electric pump, propane system with cooking stove and catalytic heater.)

I have participated in most major domestic disasters within the last 20 years including earthquakes, fires, floods, tornados and hurricanes. It doesn’t matter what the disaster is. The aftermath is the same.  There is destruction and death, and the needs of the surviving people is the same.  They all need shelter, food and water.

Addressing the basic needs after a disaster, our innovative air beam shelter is an all-in-one solution that can be deployed in minutes so survivors can begin to rebuild their lives and their communities.  I’m so proud to represent it.
Posted by Life Cube at 10:38 AM No comments: 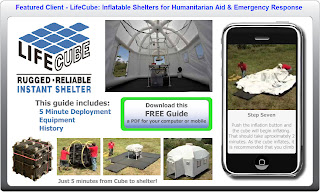 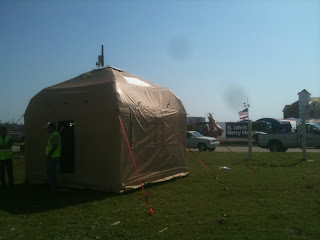 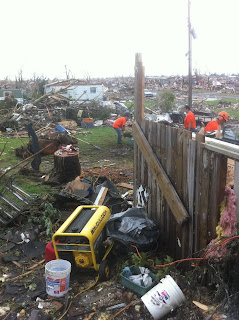